“A quarter of our jobs are supported by the Chinese market”

Visit of the Chinese General Consul, Mr. He Yanjun, at PUNCH Powerglide

PUNCH Powerglide, specialised in the design and manufacturing of automatic transmissions, welcomed the General Consul of China, Mr. HE Yanjun on its site in Strasbourg.​

The General Consul recognised the importance of China for the automotive supplier. PUNCH Powerglide’s president, Arnaud Bailo, stated: “China is the largest automotive market and represents a strategic axis for the development of our company. We established our Chinese subsidiary in 2015 in order to enhance our commercial ties. Today we count numerous Chinese car manufacturers among our customers and we have developed strong partnerships with them.”

PUNCH Powerglide is developing for instance, in cooperation with a renowned Chinese OEM, a hybrid version of its 6-speed automatic transmission, which represents a major innovation programme for its R&D Centre.

Sales towards China are constantly growing, from 25% today, they should reach 50% in the coming five years.  “Today a quarter of our jobs are linked to China”, underlines Arnaud Bailo. The General Consul acclaimed the relationship between the Strasbourg-based company and China. 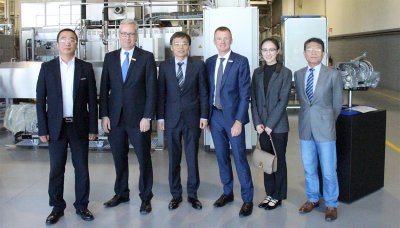